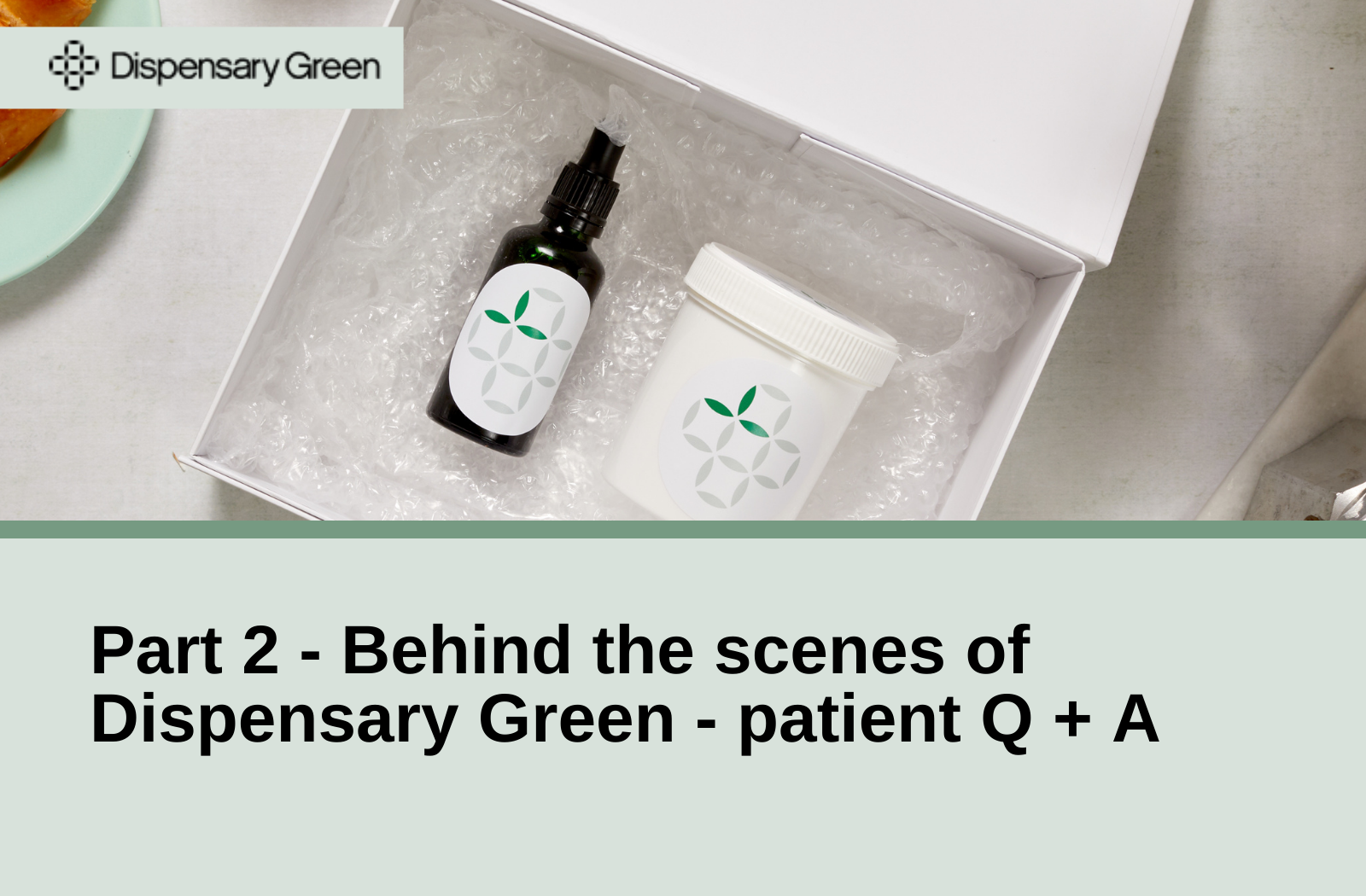 The session was chaired by Jeremy Roth, a medical cannabis patient, and Chris Ashton, our Superintendent Pharmacist, Richard Neilson, Director of Pharmacy Operations, and – all the way from Canada – Madeline Carter, Programme Manager at Northern Green joined to answer your questions.

We’ve broken the Q + A into several parts (because there were quite a lot of questions asked!) and tried to break them up into related sections to make it easier for you to read.

In this Part we’ll be sharing the questions asked about pharmacy guidelines, product availability, COVID and Project Twenty21. You can read Part 1 here.

You can also watch the webinar in full on our Youtube page.

Jeremy Roth: How has COVID affected the operation?

Chris Ashton: In fairness, like any business that’s operated during this pandemic, it certainly has affected us. I think we’ve adapted now and adjusted but in the early days it was a shock to the system especially with the growth in the industry – It was quite hard at the start. But certainly it shouldn’t be seen as an excuse for what has been happening. It affected us for a short period of time, and we’ve been able to adapt and move our processes forward. But, you know, if you’re asking me, are we affected by COVID now? No, our working practises are in place, and constantly being improved.

Jeremy Roth: I know it’s a frustration for as a patient that often loads of different services that medical services pharmacies use often use COVID as a, what seems like an excuse for things that aren’t necessarily related to COVID?

Chris Ashton: I’m sure it’s no secret that the industry as a whole has struggled with logistics, from pharmacies to patients. The message I’ve heard from several couriers is that we’re seeing COVID used as an excuse and we are challenging them very, very hard now on that, because we don’t see how that can still be the case two years down the line.

However, they are still using it as an excuse for the poor delivery services we are seeing. That being said, we are putting a lot of pressure on the healthcare industry as a whole to step up to the plate, it’s no longer good enough that things don’t get delivered on time.

Jeremy Roth: Will patients ever be able to pick up their prescriptions from your pharmacy, or from a pharmacy near to them and cut out the whole courier issues?

Richard Neilson: We don’t offer collection, we are a remote pharmacy. So although we operate out of a physical premises, we’re not allowed to have patients on premises.

I think as the industry evolves, more and more pharmacies will be looking at supporting these (medical cannabis) patients. But at the moment, the supply chain is so difficult that if you did go to a local pharmacy, the chances are it would be several weeks before they could even obtain the products – and that’s if they could do it through their usual specialist supplier.

I do think this is going to open up and it’s going to be a lot easier for patients in the future. Is that going to be one year, five years or even longer? That’s the unknown. And at the moment, we’ve been positioned to be as swift as possible to get the products in for the patients. And I do think the recent issues are temporary issues, and I don’t think we’ll continue to see them going forward, especially as the industry evolves.

Richard Neilson: That’s that’s quite common question. And I guess I think because they use this in GP practises people are used to having electronic prescriptions of controlled drugs now and have been for a couple of years, you know, they expect to see it in private as well, but as of yet it’s not the case.

We still have to wait for a physical copy that needs to be signed by the prescriber and then sent to the pharmacy. We’re looking at this and the minute that we are allowed to use electronic transfer of prescriptions in the future, we will be doing that.

Jeremy Roth: I think that the whole industry is dealing with a legislative framework that isn’t geared to this and the regulators are playing catch up. And I know someone with a bit of a legal background myself, that the regulators are struggling, they don’t necessarily understand the industry and how products work in this particular sort of environment, because it is new. They’ve not anticipated this sort of the level of growth that we’ve experienced in the industry.

Richard Neilson: Exactly. Correct. And I think that’s reflected in other areas as well, I mean the human medicines regulations are eight years old now. And I think that other services are seeing the impacts of having regulations that aren’t keeping up to pace, and I think that COVID has probably delayed that even more. So what may have already been implemented, now we’re probably waiting another year or two for.

Jeremy Roth: I think it’s a struggle from the legal standpoint. I know from my conversations with the Home Office, and others, that the understanding of patient needs is often sort of an afterthought in the legislative and regulatory process.

Chris Ashton: The MHRA and Home Office are following the rules that are put in place for them. So the frustration perhaps isn’t necessarily with those agencies, but it is the rules and regulations that they have to follow. You know, there isn’t anybody I’ve met in the industry yet that’s deliberately trying to slow things down. But we are having to follow the rules to ensure it is a legal medical cannabis supply chain.

Richard Neilson: I do think that that is quite reflective of the UK’s stance on safety first, and it’s something that I do support because we do need to follow the rules and regulations because they’re put in place for a reason.

Jeremy Roth: What changes in flour strains have to go to a doctor for consultation or a rewrite. And do you ever see the UK following the American dispensary model where you get the card approved and then you can just choose the medication that you feel works best for you?

Richard Neilson: In terms of rewrites, unless it’s actually stipulated within shared care, there’s not too much you can do in terms of changing the potency and dose. However, we are increasing shared care agreements with consultants. So hopefully, myself, and the team that I will manage, can prescribe alternatives for patients so that they can get our decent products as quickly as possible. In terms of the card like America, it’s not something that’s been presented as far as I’m concerned in terms of any legislation, so I can’t really comment on that. I think that that probably won’t happen in the UK for several years if it happens at all. I think there’s probably other steps such as following what Germany has done, that the UK might do first before implementing some other kind of system.

Jeremy Roth: Chris, how does the relationship between yourself and Project Twenty21 work, are there any new strains on the horizon within the scheme, and also, what happens when the scheme ends?

Chris Ashton: It’s a tough one. I’m sure the scheme has been set up in a way that those that access medicine through the project, even when the study finishes will hopefully still be able to maintain access. And I’m sure, if not, the industry’s aligned to support maintaining that access anyway. Nobody is going to cut patients off from their medication, that would be against our duty of care and against common sense.

The relationship with Project T21, is – and I’m not sure if it’s the right word – but a ‘sponsor’ of the project.

So we support the project financially, and we provide products at a discounted price, even potentially, sometimes that’s a loss in the hope of gaining valuable data to prove the efficacy of the products, with a with a view that that will hopefully change governmental policy and how they approach it and open the industry as a whole.

I think it’s a great initiative, I think there’s not enough of them out there. And what I really like about Project T21 is that it’s completely independent and It’s run by some terrific faces in the industry whose life goal has been to get cannabis made freely available in various global markets for patients. So we’re massive advocates for it. And it’s good to see it doing so well.

Jeremy Roth: Is there an end date in mind there? 2031. And what happens afterwards?

Chris Ashton: I think to be honest, at this point in time, it got off to quite a slow start. So I’m not sure if that end date has moved or what have you. So I suppose at this point, probably no firm comments on that, but it’s going to last for a considerable amount of time. And, you know, the market pricing is getting comparable to that over time, as well. So I think even if T21 did end, there’d still be access to those same products in the market. But without the data collection initiative, I suppose.

Jeremy Roth: I think the fear from lots of patients is that there’ll be sort of this cliff edge when T21. finishes and, and will be expected to –

Chris Ashton: No, that won’t happen. I mean, the same products that are available on T21 at a discounted subsidy are available in the private market and that will always be the case. The aim will always be to ensure access for those patients to those products. We’re not here to set up an industry and close it after two or three years – this is an industry that’s here to stay and continue to help patients.

That’s the end of Part 2. Keep an eye out for part three in the coming days – and remember you can watch the full webinar on our Youtube page.

We use cookies on our website to give you the most relevant experience by remembering your preferences and repeat visits. By clicking “Accept All”, you consent to the use of ALL the cookies. However, you may visit "Cookie Settings" to provide a controlled consent.
Cookie SettingsAccept All
Manage consent

This website uses cookies to improve your experience while you navigate through the website. Out of these, the cookies that are categorized as necessary are stored on your browser as they are essential for the working of basic functionalities of the website. We also use third-party cookies that help us analyze and understand how you use this website. These cookies will be stored in your browser only with your consent. You also have the option to opt-out of these cookies. But opting out of some of these cookies may affect your browsing experience.
Necessary Always Enabled
Necessary cookies are absolutely essential for the website to function properly. These cookies ensure basic functionalities and security features of the website, anonymously.
Functional
Functional cookies help to perform certain functionalities like sharing the content of the website on social media platforms, collect feedbacks, and other third-party features.
Performance
Performance cookies are used to understand and analyze the key performance indexes of the website which helps in delivering a better user experience for the visitors.
Analytics
Analytical cookies are used to understand how visitors interact with the website. These cookies help provide information on metrics the number of visitors, bounce rate, traffic source, etc.
Advertisement
Advertisement cookies are used to provide visitors with relevant ads and marketing campaigns. These cookies track visitors across websites and collect information to provide customized ads.
Others
Other uncategorized cookies are those that are being analyzed and have not been classified into a category as yet.
SAVE & ACCEPT