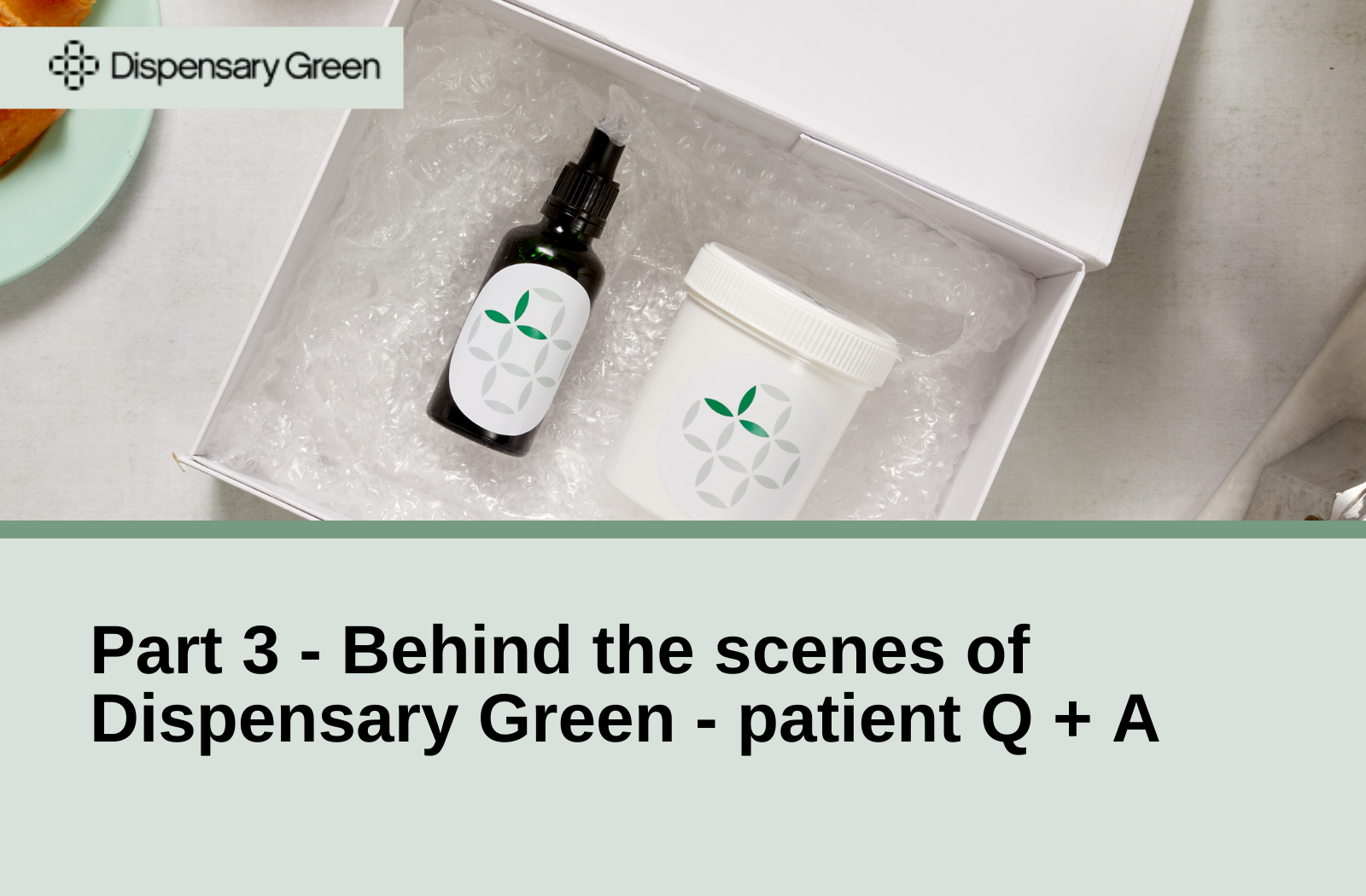 The session was chaired by Jeremy Roth, a medical cannabis patient, and Chris Ashton, our Superintendent Pharmacist, Richard Neilson, Director of Pharmacy Operations, and – all the way from Canada – Madeline Carter, Programme Manager at Northern Green joined to answer your questions.

We’ve broken the Q + A into several parts (because there were quite a lot of questions asked!) and tried to break them up into related sections to make it easier for you to read.

In this Part we’ll be sharing the questions asked about the supply chain, and the different types of product available. Click through to read Part 1 and Part 2.

You can also watch the webinar in full on our Youtube page.

Jeremy Roth:
Could you talk me through some of the some of the different providers that are involved in the supply chain from growth to the to when it gets to the patient? So how many? How many steps does that have? Who does it go through?

Chris Ashton:
If we go end to end, you’ve got the providers that grow the product – they won’t necessarily be the ones that then pack it and release it into the market. You could have, for instance, Northern Green growing it, and then it could be going to somebody else to then pack it and quality release it.

It’s then shipped across the globe from various different countries to the UK. So there’s a logistics provider there. It would land in the UK with a licenced importer, of which there are only a few eligible to work with cannabis. And from there, it’s sent to the pharmacy on a prescription by prescription basis. Then from pharmacy to the patients on a prescription basis.  So you’ve got lots of logistics in each of those chains, which is strained I suppose from COVID.

At the start of that process, you then have two sets of permits involved. We have the UK permits – which we have to  get through the MHRA and through the home office – so that’s two different applications. And then I understand that in Canada for example, they have to go to their health board or Health Canada to get their set of export permits to ship to the UK.

The permit process alone can take – worst case scenario – I’ve seen it take as long as six months to get new permits. You know, some countries are quicker than others and, and even ourselves – we’ve seen the MHRA and home office take anything from a week to three months to approve permits on our side as well.

Jeremy Roth:
From what you’ve said there, there are a lot of potential stress points as things go along. Obviously it doesn’t take away from your responsibility, but there are couriers that are involved, there’s air logistics which has obviously been under a lot of pressure recently.

Chris Ashton:
We should make it clear that Dispensary Green is a pharmacy, and they don’t do the importing. They don’t do the permit processes. We just know a lot about how they happen, because we try to support those looking to import into the UK. That being said,  it shouldn’t be seen as an excuse.

Jeremy Roth:
Madeline, how does medical cannabis differ between growers?

Madeline Carter:
In Canada, we are allowed to do various growth methods. Through the summer months we have producers that have large outdoor grows, which is typically done in soil. They grow larger plants and higher volumes. We also have quite a few greenhouses, which are very similar to outdoors. And then we have a lot of indoor producers.

We are an indoor producer. There are various different grow methods and irrigation styles that are used throughout the industry and there’s no regulations on which type of grow method has to be used. So you see, some producers do aeroponics, hydroponics, all different types. For us specifically, we are hydroponic indoor grow. We have different irrigation types such as flood and drain, we have drip systems, and different ways of actually growing and pruning the plants. So in that you see variability in the output of flower produced just because of all of the different growth styles that are available and no restrictions to what each producer can do.

Jeremy Roth:
Madeline, I’ve heard that your flower isn’t irradiated, Why are some irradiated and others not?

Madeline Carter:
Irradiation is a process used to decrease the microbial contents in the flowers if they are outside of what the specified range is. But at Northern Green we do not radiate. We’re able to do this because we are an indoor facility, we are able to have a lot more control over our environment and our processing rooms versus other facilities. Greenhouses can have a little bit more influence from the natural environment where you have high humidity during the summer months etc which can impact the microbials in the plant.

It’s a living organism so there is inherently some microbial growth in there. However, Northern Green Canada, maintaining our GMP status, we are not licensed to do any irradiation on our flowers. So we grow and have all of our processes in place so that we do not have to irradiate our products.

Chris Ashton:
I would say at this point, I think Northern Green is the only GMP approved grower that doesn’t irradiate because it is grown in such a clean environment. I certainly feel very lucky to have Northern Green working with us because it shows the quality of the product that they don’t have to irradiate it to get the microbes down.

Jeremy Roth:
Is the irradiation process to meet those standards? Or is it just this is some that choose to.

Chris Ashton:
Radiation is necessary sometimes to get product within the standards so producers have no choice but to comply with those standards. As I understand it most other producers use gamma irradiation. I think there are one or two out there that use electron beam.

I think there’s some suggestion that the gamma radiation can reduce the quality of the cannabis, I suppose it’s quite subjective, but certainly the feedback I’ve had is non irradiated, indoor grown is sort of the golden nugget of cannabis that’s out there in the industry.

Jeremy Roth:
What is the control procedure for cannabis flower?  We all know that there have been, what seems like so many recalls. If we start with Richard.

Richard Neilson:
There will seem to be a lot of recalls, especially when it affects you or when it affects a group. But if you look at it in terms of everything we offer, there’s actually been very few recalls. And when we look into other markets – for example Canada – recalls are something that happen on quite a regular basis.

Is it a bad thing? I think it is when it affects the patients, but it’s done for a reason. When there’s a recall there is something that someone (normally the MHRA in the UK) is concerned about, and when the MHRA have got concerns, then me, as a healthcare professional, also shares those concerns.

And that’s why an item of stock is sometimes quarantined until any investigations are done. I think that going forward, that will be less and less and I think that in the future there will still be product recalls but you’ll be able to see more alternative products available so that people can quickly prescribe products that they can use instead.

I think that that’s something that we can look forward to even though there have been some recalls – we need to remember it’s because we have such strict standards in the UK. And I’m very supportive of those standards.

Chris Ashton:
There’s been a real lack of a laboratory that is suitably licenced and with the suitable machinery here in the UK to test products. I received word from the MHRA that there is actually now one approved in the UK and they’re going through what’s called the ‘technology transfer process’. This means additional testing of the product once it lands in the country. So Northern Green would test it before they ship it here. We could then test it in addition when it arrives. If there were quality complaints from patients then we can send retained batches or sample batches from patients off to be tested immediately and get a sense for you know, how big of an issue there is? Or exactly what the problem is.

So that’s a really big step for the UK quality management system that has been missing since medical cannabis was legalised.

Jeremy Roth:
Madeline, do you experience recalls in the Canadian market at all?

Madeline Carter:
Yes, we do from time to time – and that’s because there is variation in the different producers, and the different growth styles that are out there.

We do have producers that grow outdoor cannabis, which inherently has its own issues. We also have growers that use greenhouses, and then we have indoor facilities such as ourselves. So we do see them from time to time with various issues, but it is something as the industry grows, and as people learn more, we’ll see a reduction in that.

That’s the end of Part 3. Keep an eye out for part three in the coming days – and remember you can watch the full webinar on our Youtube page.

We use cookies on our website to give you the most relevant experience by remembering your preferences and repeat visits. By clicking “Accept All”, you consent to the use of ALL the cookies. However, you may visit "Cookie Settings" to provide a controlled consent.
Cookie SettingsAccept All
Manage consent

This website uses cookies to improve your experience while you navigate through the website. Out of these, the cookies that are categorized as necessary are stored on your browser as they are essential for the working of basic functionalities of the website. We also use third-party cookies that help us analyze and understand how you use this website. These cookies will be stored in your browser only with your consent. You also have the option to opt-out of these cookies. But opting out of some of these cookies may affect your browsing experience.
Necessary Always Enabled
Necessary cookies are absolutely essential for the website to function properly. These cookies ensure basic functionalities and security features of the website, anonymously.
Functional
Functional cookies help to perform certain functionalities like sharing the content of the website on social media platforms, collect feedbacks, and other third-party features.
Performance
Performance cookies are used to understand and analyze the key performance indexes of the website which helps in delivering a better user experience for the visitors.
Analytics
Analytical cookies are used to understand how visitors interact with the website. These cookies help provide information on metrics the number of visitors, bounce rate, traffic source, etc.
Advertisement
Advertisement cookies are used to provide visitors with relevant ads and marketing campaigns. These cookies track visitors across websites and collect information to provide customized ads.
Others
Other uncategorized cookies are those that are being analyzed and have not been classified into a category as yet.
SAVE & ACCEPT